Cleaning up the blog

It seems we have hit our 1GB limit on photos via google picasa!  High resolution photos take up too much space!  Need to start downsizing some of our photos.  Or maybe start using a 3rd party image host.
Posted by Audioless Winnipeg Group at 16:02

Here is a great turntable.  Now I know Toshiba doesn't raise much attention, but sometimes it has it's advantages.  While some may snub their nose at the name, there is a lot of beauty on this turntable.  First, it weights ~26lbs, and that's pretty heavy.  Second, it has a beefy direct drive motor.  Third, it has heavy platter.  Fourth, the plinth is uses a metal/steel top for added vibration control.  And finally, if you can't seem to find any information about this turntable, instead of using Toshiba SR-355, look under Aurex SR-355.

What's Aurex?  That was Toshiba's namesake for their higher end gear, like how Acura is for Honda.  This was named Aurex SR-355 in Japan as they thought it would compete with some of the bigger name.  And, in a way I can see why.

It is truly a well built turntable.  It's a direct drive, 2-speed and fully manual turntable.  Comes with a new Pickering V15 cartridge as it seems to be a better match over the Shure. 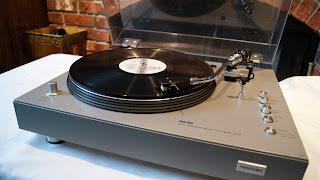 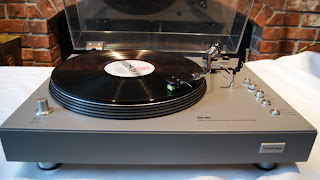 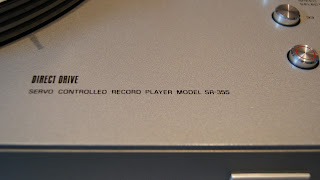 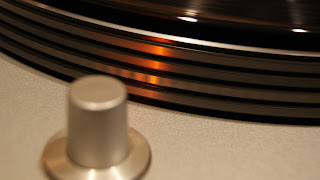 Posted by Audioless Winnipeg Group at 21:31

Now this is a rare gem!  Before you snub your nose at the Realistic name, the question you have to ask yourself is who made it for Radio Shack?  Well, the answer is simple, very simple.  This is a Mosfet amplifier and there was only one company to use mosfet technology back in the late 70s and early 80s, that was Hitachi!  This is a Hitachi made receiver for Radio Shack, and is one sweet sounding amplifier!

Many may recognize it as the receiver sitting on top of my component stand.  It sat there for more than a half of year and I don't think I've really used it except on a couple occasions.  And, if I haven't used it in the past 6 months, it's time to part ways with it.

So what's so special about mosfet?  It has a strong resemblance to the good old tube sound without the added harmonics and distortions.  Which means, its softer in presentation in comparison to their bi-polar transistors with a lovely mid range frequency.  Bass and treble are still very nice, but the mid range is what makes this amp sound so very nice!  It sounds as it's a bit U-shaped in it's sound frequency.

But, there are plenty of features on this baby, such as a built in clock!  It's also features a digital tuner and Dolby FM.  Because it's a digital tuner, you also have memory presets.  And, of course to give it more beautiful lights other than the blue display, a digital VU meter underneath the display!  Also features a main in and pre-out if you wish to use it as a power amplifier.

Oh, and it's rated at 60wpc into 8ohms and is built really well, and heavy too!  Matches well with brighter sounding speakers, at least that's how I would match a set.

Overall, it's in good condition, it is missing the plastic trim on the sides and the woodcase has a few chips.  But, it is still very presentable and sounds great!

Lots of information on the internet! 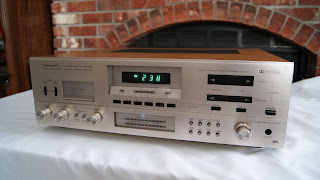 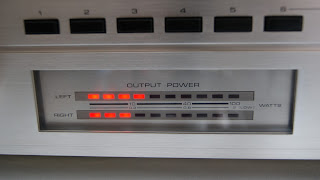 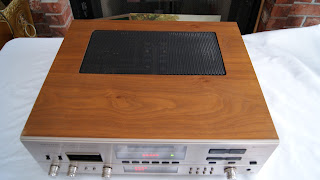 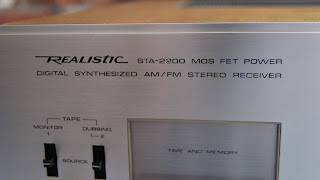 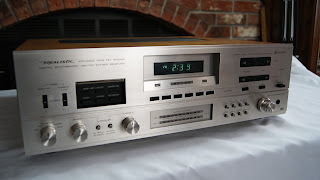 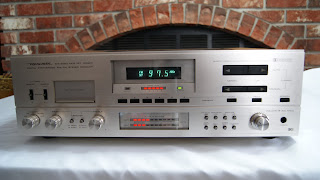 Posted by Audioless Winnipeg Group at 15:42

Here is a turntable that I miss, the Mitsubishi DP-EC8.  It's one of those odd turntable that you don't see very often, and this one is the second one to ever come into my hands.  I really like these turntables, as they're well built, they sound great and the foot print is smaller than most turntables.  It's a tad more slimline than most, which is a plus for some.

Last blog posting for this turntable, I did not provide a description.  This time I will!

This is a fully automatic, direct drive, quartz lock, 2-speed turntable with repeat feature.  It features a straight tone arm with a carbon fiber headshell.  Everything on the tone arm design from the aluminum base, the arm design itself and headshell was designed to minimize resonance.

It also features an automatic disc selector via that crystal at the rear left hand corner of the plinth.  So, really, all you need to do is press some buttons.  It's a very trouble free turntable as you don't really need to do anything.  Everything is controlled by the push buttons on the plinth, even moving the tonearm to the left and right.  It's a very neat turntable!

There's actually a very good description of it on Vinylengine.com under the Mitsubishi Medallion Catalog.  The DP-EC8 was probably their top model for their non-linear tracking model turntables.

It features an Empire, yep another Empire, 2000E/III cartridge with a brand new stylus from Japan.  It's not as detailed as the Empire 5000 but it is still a very nice cartridge!

Overall, it's in great shape.  Dust cover may need a good buffing but, nothing is cracked and completely functional. 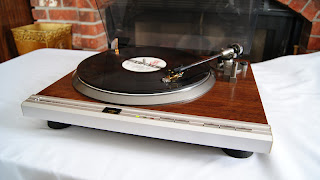 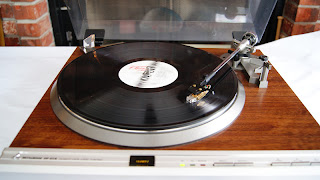 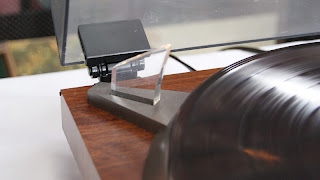 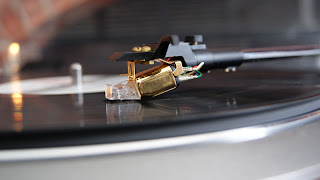 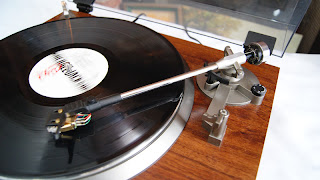 Posted by Audioless Winnipeg Group at 12:26

One of my favorite looking turntables so far, and it's beautifully built as well!  Freshly serviced and ready to go!  The original took care of it, and so have I!

The Empire 5000 III is a very, very, very nice cartridge and sounds exceptional!  The Empire 5000 may have been one of Empire's higher end cartridge for this particular series and with the new stylus it sounds superb.  Very nice coloration in the signature, with excellent midrange, bass and treble.  It's a very inviting sound.  Very smooth mid range, which is very nice for vocals, especially female vocals.

Overall, it's in excellent condition!  Dust cover has the usual scuffs. 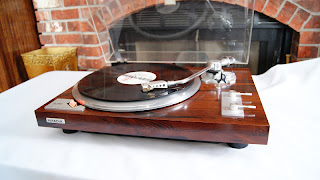 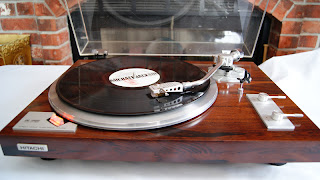 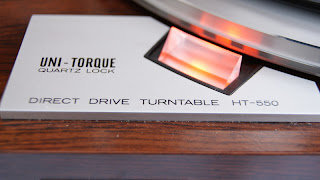 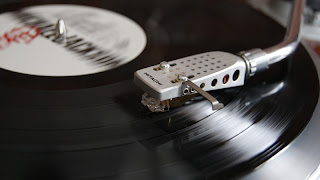 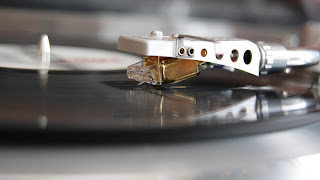 Posted by Audioless Winnipeg Group at 12:14 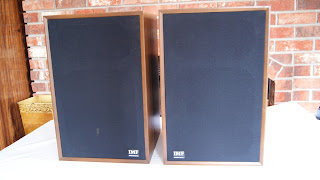 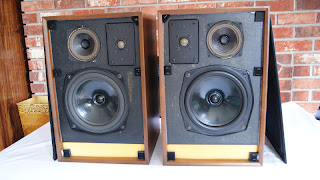 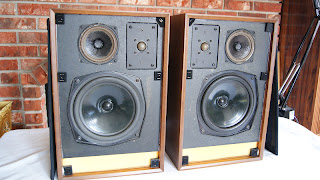 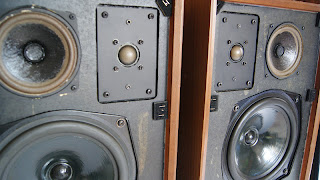 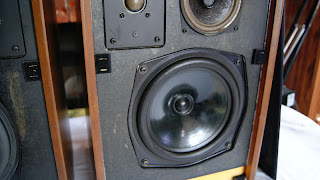 Here is a rare treat!  A nice pair of IMF Super Compact, 1st generation or the original.  British made and British designed!  It has one of the nicest 8" woofers in it's class and an excellent tweeter!

While they are not a true transmission line design, they are still well engineered and one of the better sounding "small" speaker out there that has an 8" woofer, hence the name Super Compact!  But, it's a bit wide.  They make great speakers for someone who wants a nice sounding pair of speakers in a small den or bedroom.

It has a KEF woofer, Audax or Polydax tweeter and either a Peerless or ELAC mid driver.  All wrapped in the classic real walnut veneer.  It has that typical British cabinet design, think Celestion, Celef, etc...If there was not an IMF badge up front, it'd be hard to tell who made this speaker.

Overall, it has a nice presentation in sound, very good bass for an 8".  As well, they are in very nice condition!  If you want some unique British speakers,  I can't think of anything more odd ball than these IMF!


Posted by Audioless Winnipeg Group at 14:57

Fresh trade!  Big ol' speakers.  Well, not really, but they have a big sound to them.  These heavy guys are the Bozak LS-250.  Bozak was an American Company who made plenty of wonderful sounding speakers, and made right in the USA.  LS stood for Listening Series.

These are great sounding speakers for those who love that "old school" sound.  That 12" woofer produces a lot of bass!  They are a 3-way with, 12" woofer, 4.5" mid and 3.25" tweeter with adjustable controls for the tweeters in the back.  No foam on these drivers, just rubber and treated paper so no need to worry about replacing the surrounds.

They make great speakers for a wide variety of music genres from Classical, to Classic Rock, these Bozak are great.

Overall, they're in great shape.  Cabinets are in wrapped in wood grain vinyl and they're heavy so be careful when you lift them!

I tried to take some pictures with the grills on but, the low lighting and the overcast made it really hard to take some nice shots.  Grills look as if they're washed out. 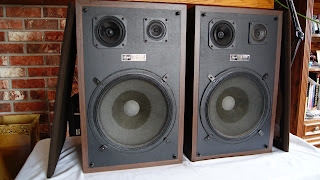 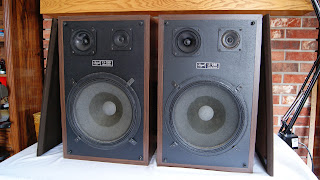 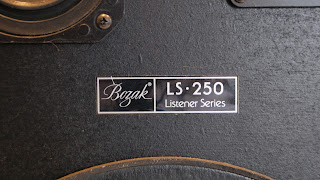 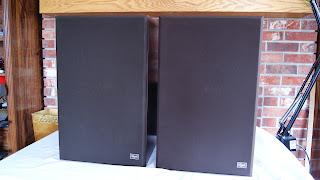 Posted by Audioless Winnipeg Group at 12:51