One of the holy grail of Marantz turntable, the venerable 6300! It was sure a beauty to behold and wonderful to work on. Super easy to service as there's not a whole lot of moving parts.

The build quality was superb, it reminded me of the Yamaha YP-450, or at least I think it was the YP-450. The whole plinth was a solid or at least layered MDF they only cut out what was needed to fit the component. So, 90% of the plinth was solid. The exterior was a nice thick veneer and the motor was awesome. I've always loved large motors as they always generated more torque and had less variance to weight.

The tone arm was decent, I've seen this tone arm on several CEC labeled turntables and it's well made. The platter is of a good weight, similar weight to the platter on the Technics SL-1500mki.

It had a very interesting feature where you can either set it as a pure manual table or have it auto-lift, no return, at the end of the record and shuts the turntable off. The rest is of your typical turntable being it's a 2 speed with pitch control.

In short, it is a well made table, with a very good motor, decent arm and good specifications all wrapped up in a beautiful wood veneer. Not to mention, out is complete with original headshell, 45rpm adapter and those infamous feet!

This one was serviced with new RCA cables and comes with a Shure M95ED cartridge with original and NOS N95ED stylus. It sounds fantastic, I love Shure cartridges. They are always so clean and neutral.

Now, time for me to be a bit honest. It is a great table but, the name offers more than what the 6300 really is, a nice middle level turntable. I would put it as equal to the Technics SL-1500mki. And, that's all I am going to say... 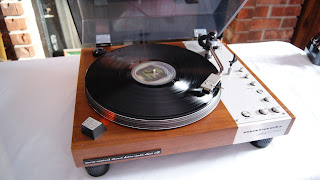 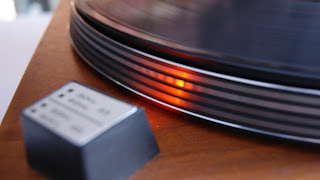 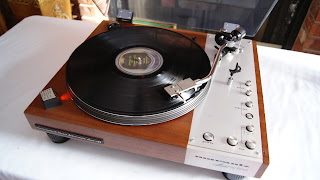 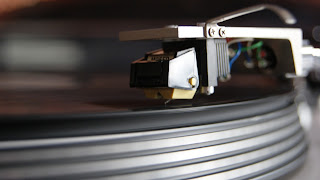 Posted by Audioless Winnipeg Group at 19:43

I know this turntable isn't of the norm that most people want as it doesn't give that vintage vibe. However, the Hitachi HT-45 is still a very capable turntable of the early 80s. Despite having a straight tone arm, it does mean it's a low mass tone arm and generally favours high compliant cartridges like Shures and Audio Technica.

Since it was made during the early 80s, it is relatively slim line. However, it still has all the goodies of a capable turntable. It is a 2-speed, direct drive turntable with automatic return and pitch control. The overall build quality is pretty much standard of the 80s. And it's quite reliable.

There isn't a lot of information out there, however, there's been a few rendition of this turntable, like the earlier or later HT-40S and the Baycrest models.

The tone arm shaft is aluminium, and it's relatively easy to service so it's of decent quality. As well, the hinges are quite nice. It also features Hitachi's unitorque motor.

It is quite a nice entry level turntable for some one that is looking for a lesser known table. 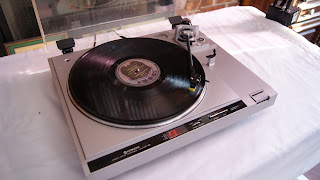 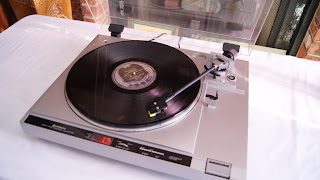 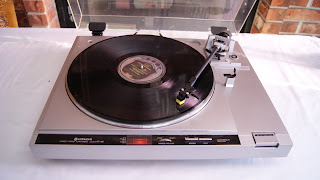 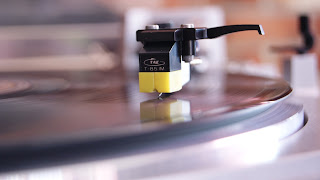 Posted by Audioless Winnipeg Group at 19:07

But, the 551is really no different than the other lower powered siblings of this series. They have the same aesthetics and pretty much the same sound, and of course always needing new fuse lamps!

What can I say about this little unit? Well, for one it was in excellent condition and we were the first to break the sticker and open the unit up to service, clean and test the unit. Finding fuse lamps in Winnipeg can be tricky and finding the correct value was tough, we actually had to put a lower voltage fuse lamp in. Does it make a difference? Not really, it might be as bright but, it will run cooler!

It's a pretty nice receiver, I think it looks great. The silver face with the faux wood-metal case and the cool green lights makes it a definite looker. I won't bore you with the specs but, it a low wattage receiver pumping out 16wpc. But, it does have all the goodies one would want, phono, tape, FM/AM, 2 speaker outputs and auxiliary.

I guess everyone is wanting to know how it sounds. Well, it sounds like a receiver from the mid 1970s. It has decent low end response, the mids are nice and for the lack of better word the treble is a bit soft, rolls off more than I would like but, some may not care. The overall sound signature is towards the warmer side of the spectrum. I thought it paired quite well with the Mission 70mkii that we had. It's not as "warm" as per the older Sansui receivers and amplifiers from the early 1970s but, it's pleasant sounding, that's for sure. It made a great entry level receiver for some one looking for that retro sound. 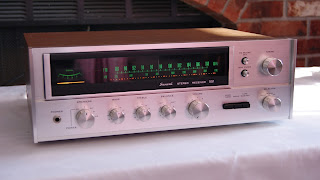 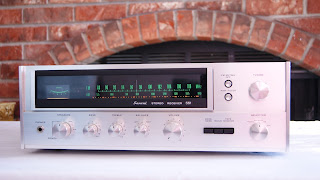 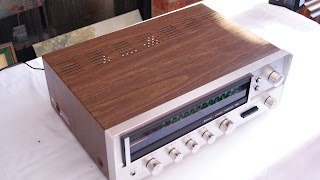 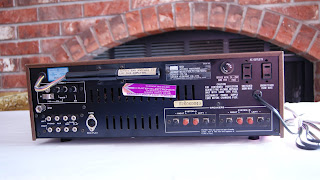 Posted by Audioless Winnipeg Group at 18:55