We've always enjoyed Hitachi gear and this is no exception.  This was Hitachi TOTL consumer turntable back in the day in the mid 1970s.  And, is one heck of a turntable.  This turntable is in fabulous condition.  The only small flaw is stenciling of the "E" on Repeat is missing.  Other than that, this is beautiful looking turntable.  Probably one of the sharpest looking turntable of the era.  It has that two tone plinth, the top being that lovely brushed metal and the bottom half being that wood look, vinyl wrapped, but real wood underneath.  It also has a smoked dust cover to give it that additional classy look!

It has a high stability tonearm and the unitorque motor that delivers a smooth, quiet and stable rotation for low wow and rumble.  This is a 2-speed, direct drive, fully automatic turntable with repeat.  It's been freshly serviced and was part of a member's private collection.  It truly looks better in person.

It comes with the ever famous Shure M91ED cartridge with a new stylus as well an additional Hitachi headshell.

It also has plenty of other features, such as manual mode (basically, semi-automatic) with a disc selector size.  Apparently, no one has a 10" record so that can't be tested, haha.

Overall, this is an excellent turntable and comes with an excellent cartridge.  It looks great, plays great and is now looking for a new home! 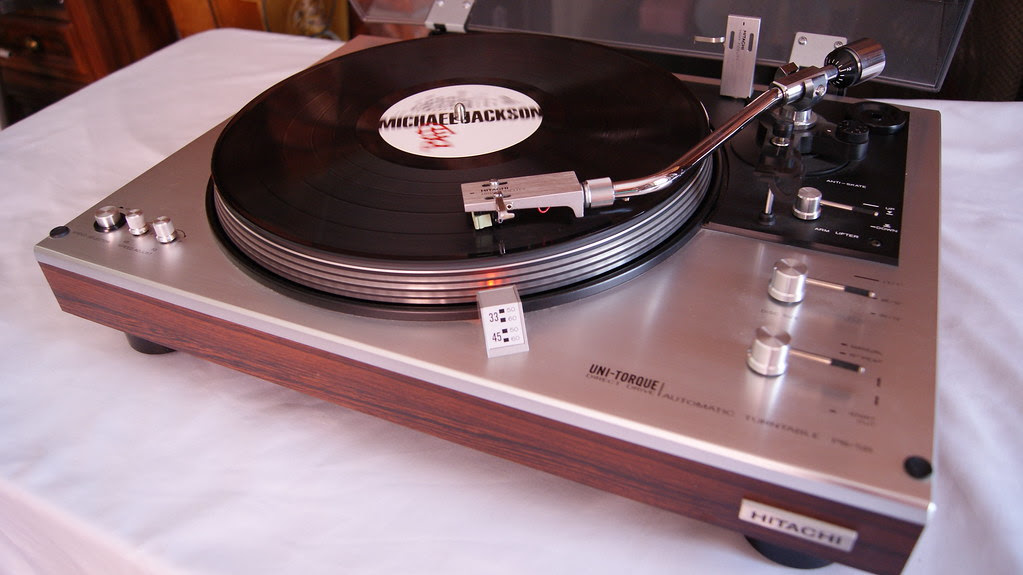 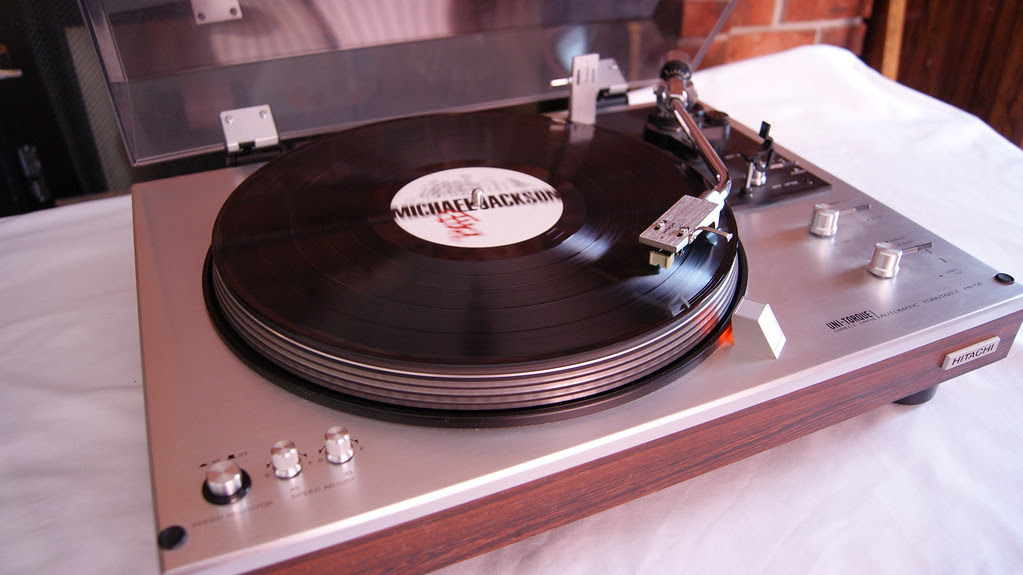 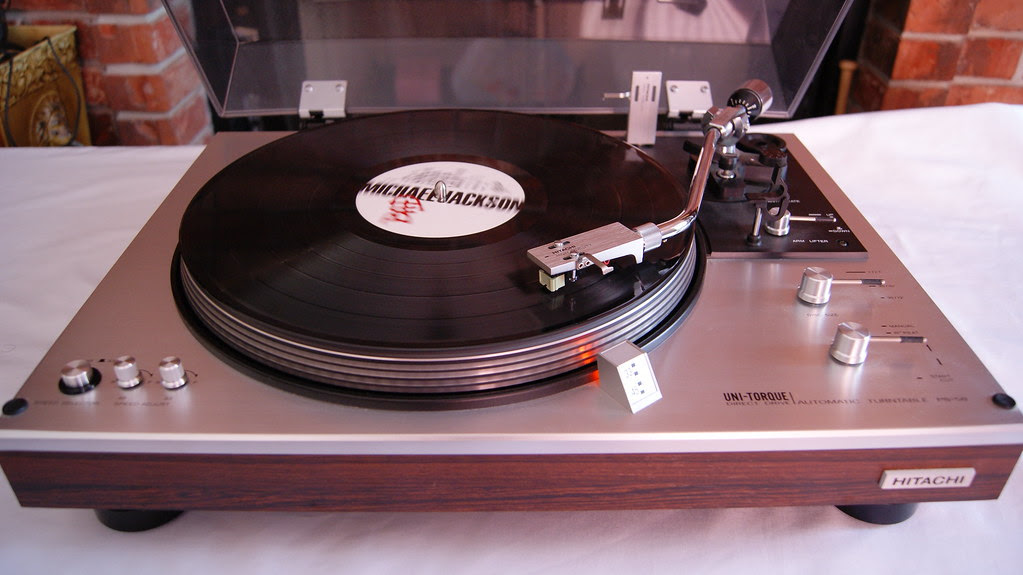 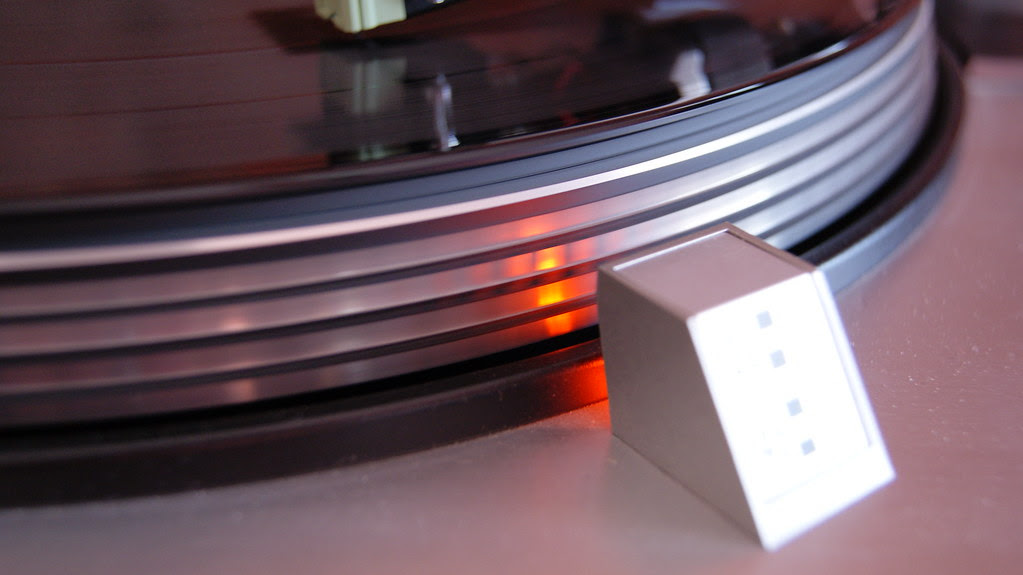 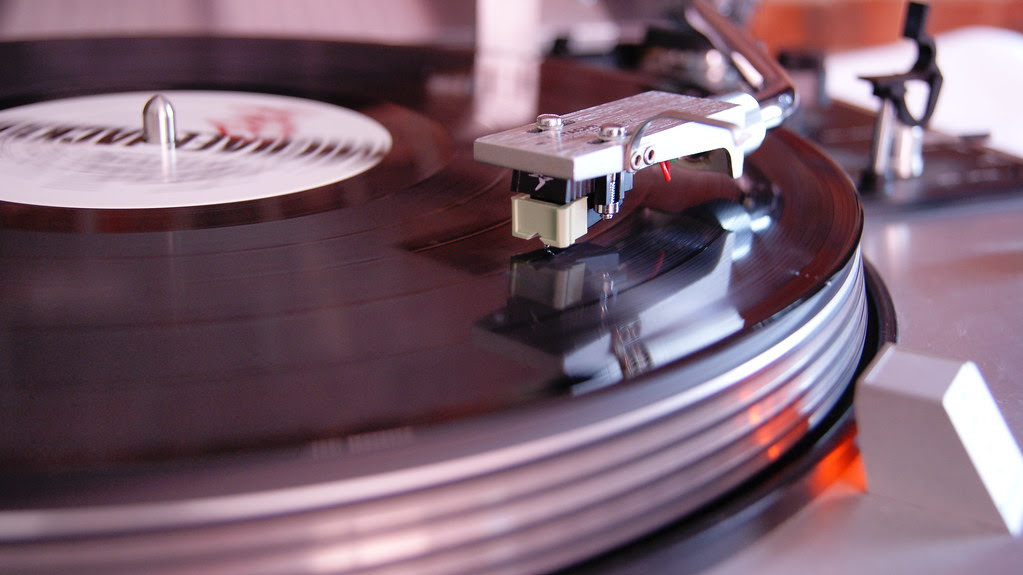 Posted by Audioless Winnipeg Group at 16:50

I can't believe one of our guys is wanting to sell this odd amplifier.  He's been the original owner since new and I've heard it on several different occasions and thought it was a really nice amplifier.  Very clean, and dynamic, just the way I like it!

This is a bit of an odd one as it's was from the 90s and has that pseudo 3.0 setup (Front, Center, Rear) and Dolby Pro-Logic decoder.  However, the rear channels are just played in mono.  So, the main circuit is your typical integrated stereo amplifier and then the board just separates one channel for the rear.  I guess if someone wanted to they can use it for home theatre use but, it's quite dated for that.  However, as a stereo amplifier in a 2-channel setup, it is a superb unit.  It's made in Britain!  What's not to love about it?

Inside the amplifier is a huge transformer, I took a picture off the net.  Just shows people that if the price is right, quality can be found anywhere.  I think there is a misconception that many people think we, as in Audioless Winnipeg, just love vintage audio equipment.  No, we love all from any era.

I have to admit, having a remote is quite nice and handy!  The major flaw is that you can only have one set of speakers hooked up.  But, upside, the speaker post in the back can accept banana plugs!  Actually, the downside isn't hat major.  Having one set of good quality speakers is all you need.

Other than that, it has all the inputs, including phono.  It has a direct button to bypass all the tone controls and a separate power cord in case anyone has an upgraded power cable they want to use.  This is a really well made amplifier and runs pretty cool.

I guess people want to know what it sounds like.  It's very clean, neutral and bit on the more analytical side.  It has good soundstage, excellent detail and speed.  I can't say it reminds me of anything in particular as it is it's own unique sound signature but, I would probably match it with either a darker sounding speaker or neutral sounding speaker. 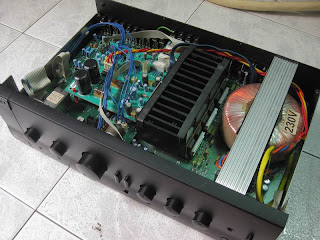 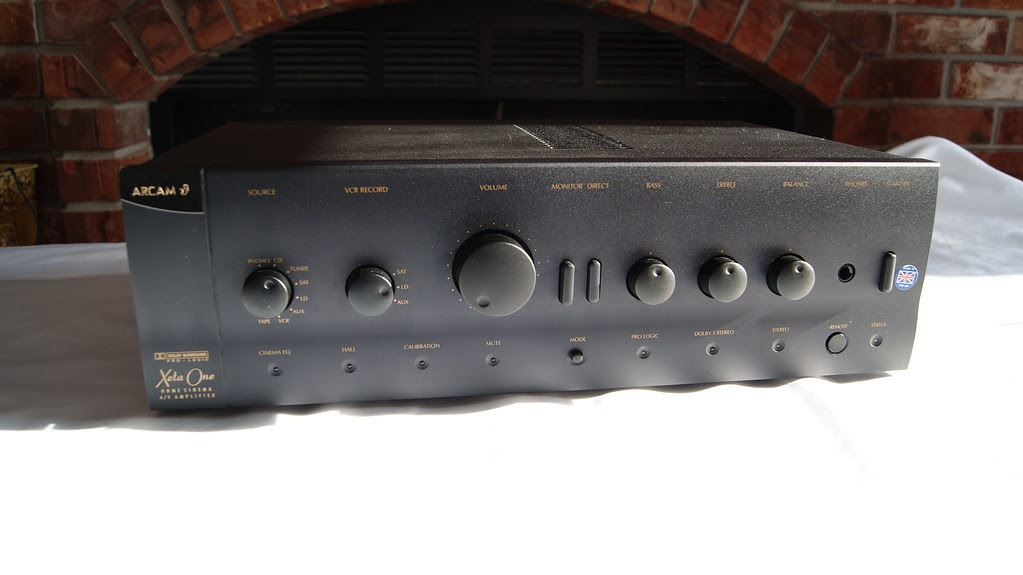 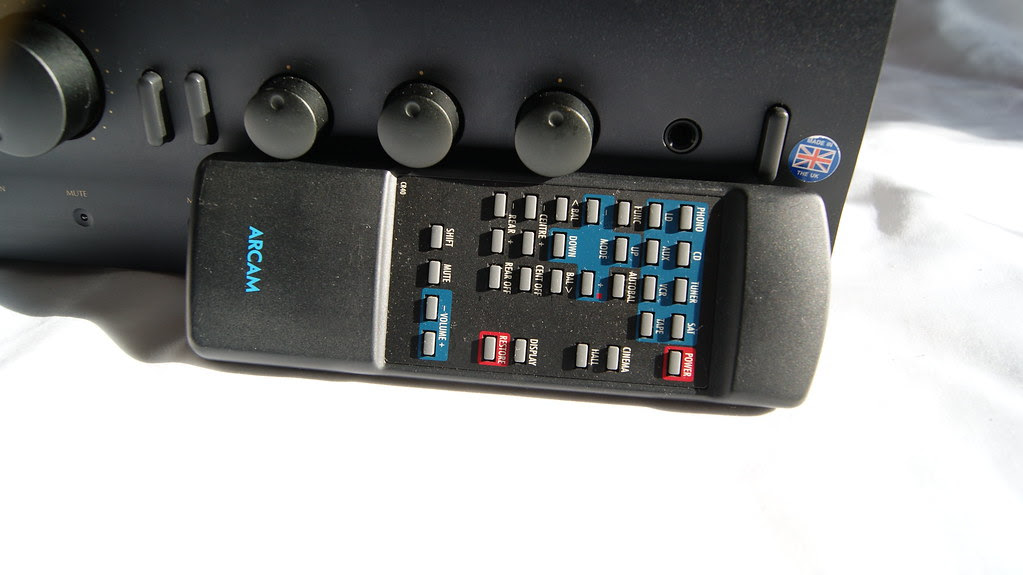 Posted by Audioless Winnipeg Group at 12:16

Another Hitachi gem!  This is part of their Mosfet series of gear that Hitachi produced during the late 70s.  For the most part, the preamplifier and power amplifier was their entry level Mosfet powered separates, while the FT-8000 tuner was their TOTL FM tuner, no AM.

The Mosfet sound is different than most solid state circuitry/transistors.  It has a very "tube" like presence with a very nice mid range presentation.  It's on the softer side, so any bright speakers would match well with this setup.  But, it still dynamic like most solid state.  Just not as dynamic in comparison to their earlier stuff with the darlington transistors.  In other words, they are coloured but, in a good way.

The HMA-6500 allows 2 pairs of speakers and pretty VU meters.  The HCA-6500 preamplifier has all the basic inputs and features that most people need.  Overall, they are a really nice sounding set.  The FT-8000 is built like a tank and sound pretty nice for a FM tuner.  But, it is just a tuner!

This setup is rated at 60wpc into 8ohms and may be one of the sweetest sounding gear you've heard, if you haven't heard Mosfet before.  All the pieces are in good condition.  They do have some minor scratches.  Power amplifier and preamplifier was checked out by our tech. 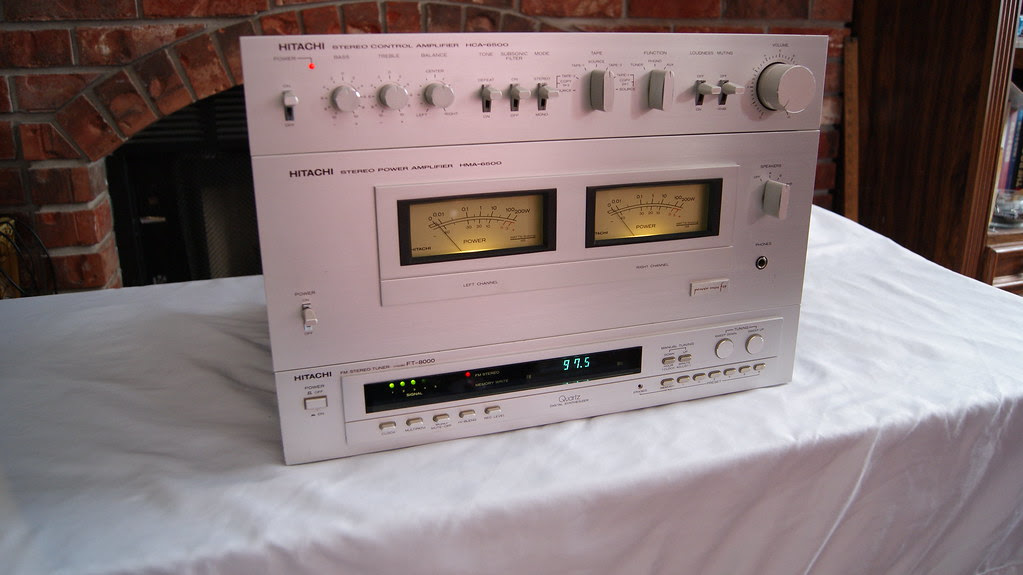 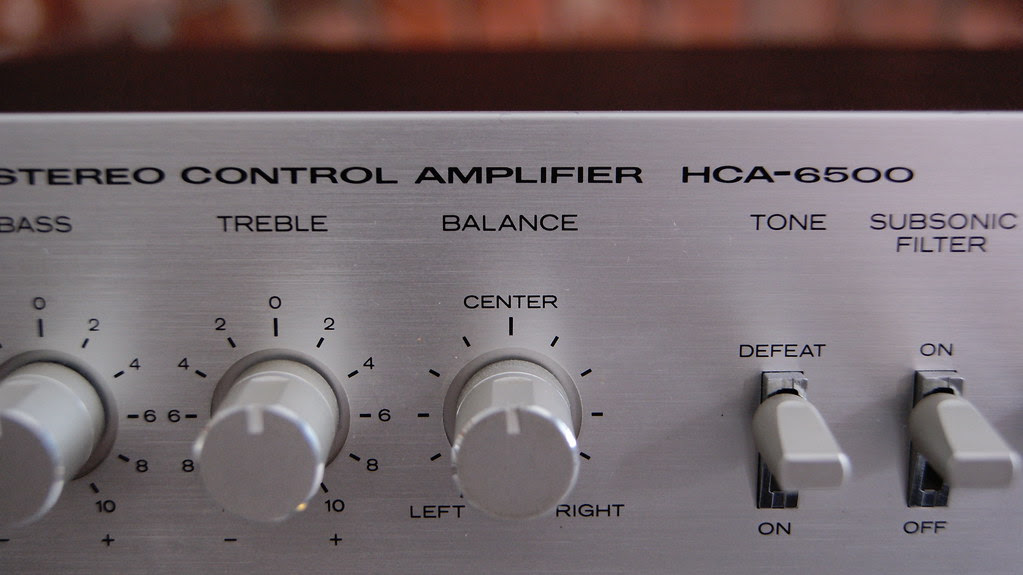 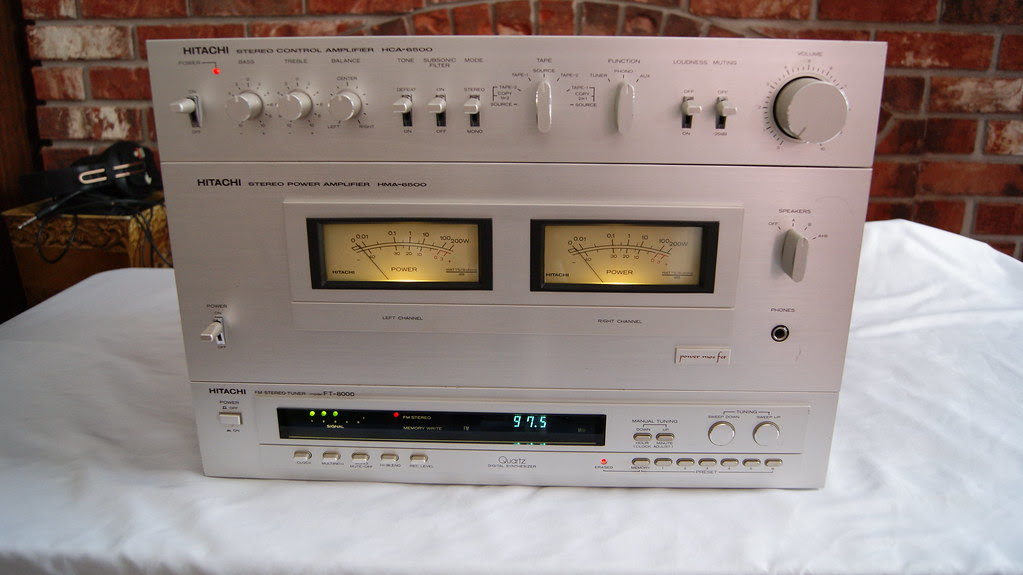 Posted by Audioless Winnipeg Group at 11:55

A member has just informed me of a few British pieces he is looking to sell!  Nothing too big, a couple of bookshelves and an amplifier but, they are nice pieces!  Stayed tuned!
Posted by Audioless Winnipeg Group at 22:11

I've noticed that I have a few cartridge bodies that need styli, so I ordered a batch.  Given the time from Asia, it'll probably be here in another week or so.  Now, I just need to snag the AT12 stylus I bought previously from Asia back from one of our members for the Toshiba turntable as I am thinking it will sound better than the current generic ones that I have for it.

I am glad that there are good quality styli for these Shure cartridges!
Posted by Audioless Winnipeg Group at 22:41

This is truly a diamond in the rough.  I am a big Hitachi fan, why?  They made great stuff, from turntables to speakers and everything in between.  This gem is no exception.  Like it's fraternal twin, the SR-903, both seem to share the same genetics but differ cosmetically.  I think both are great but, atlas I have the SR-904, which you could say is the updated version.

So, what makes this receiver so special?  Well, it has to do with Hitachi Class-G topology and that fact that Hitachi used primarily Hitachi parts this receiver makes it a OEM special!  So what's so special about the Class-G?  Well, it has a 3 rail which allows additional voltage swings and increase peak power output at certain frequencies.  NAD and Carver (remember the magnetic field power) used this same topology as well as many other Japanese manufacturers during the 80s.  Unlike the Carver, this does not suffer from bad voltage swings due to a crappy power supply.  In other words, It is one stable beast that sounds great.  It also has the "Dyanharmony" badge!

It is rated at 75wpc into 8 ohms but, has a peak of over 100wpc when pushed.  This makes the top end (treble) sound more vivid in some Classical pieces.

Cosmetically, it has the all so desirable VU meters and a cool green lights which doesn't show up nicely in daylight.  It has plenty of features and a very nice midrange attenuator, which isn't commonly found very often in any receivers or amplifiers in comparison to the typical bass and treble.

It has the usual phono, aux, FM/AM and 2 tape inputs with loudness, high and low filters and stereo/mono buttons just like any receivers from the era.

Overall, it's in very nice shape, it does have a few small scratches and dings but, it still presents itself very nicely.  It also has a read wood cabinet that's been vinyl wrapped!  Oh well, but it sure looks nice!

This is a very nice sounding amplifier and well built.  It sounds really clean and dynamic, and really it does sound like a NAD.  I can't say if it's better or worse since I don't have any NAD gear but, it sure reminded me of it.  Nonetheless, this is a excellent sounding piece of machinery. 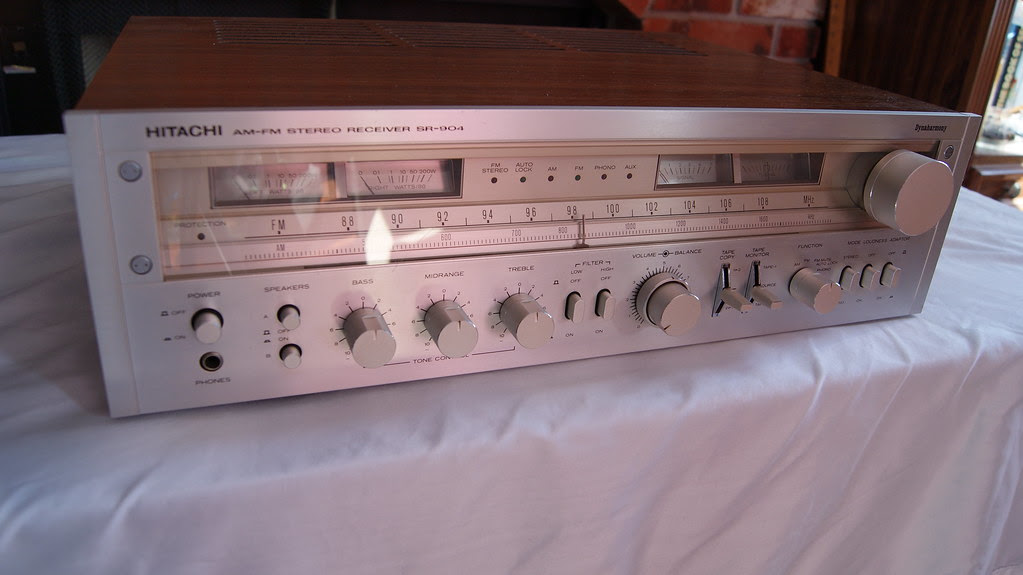 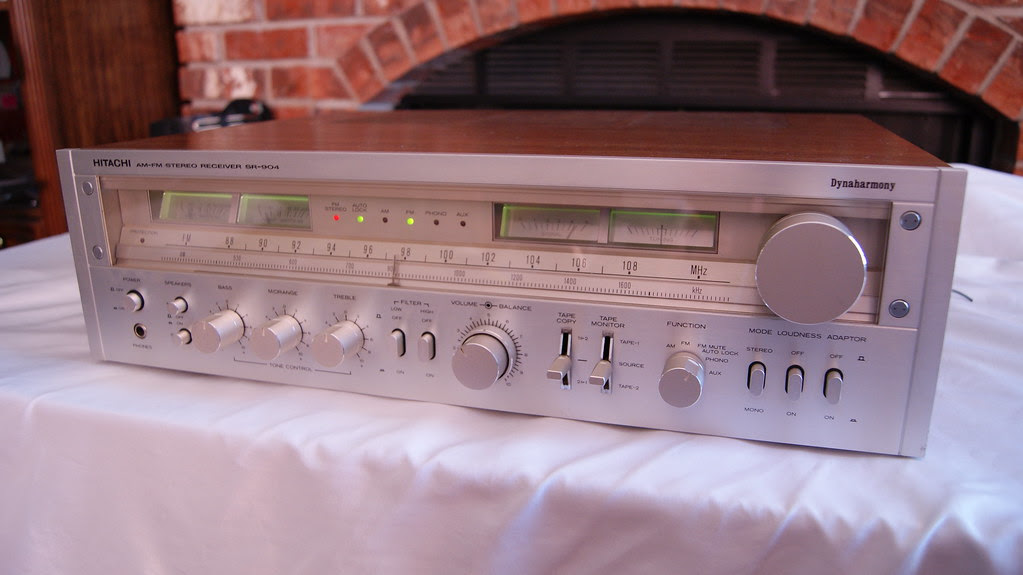 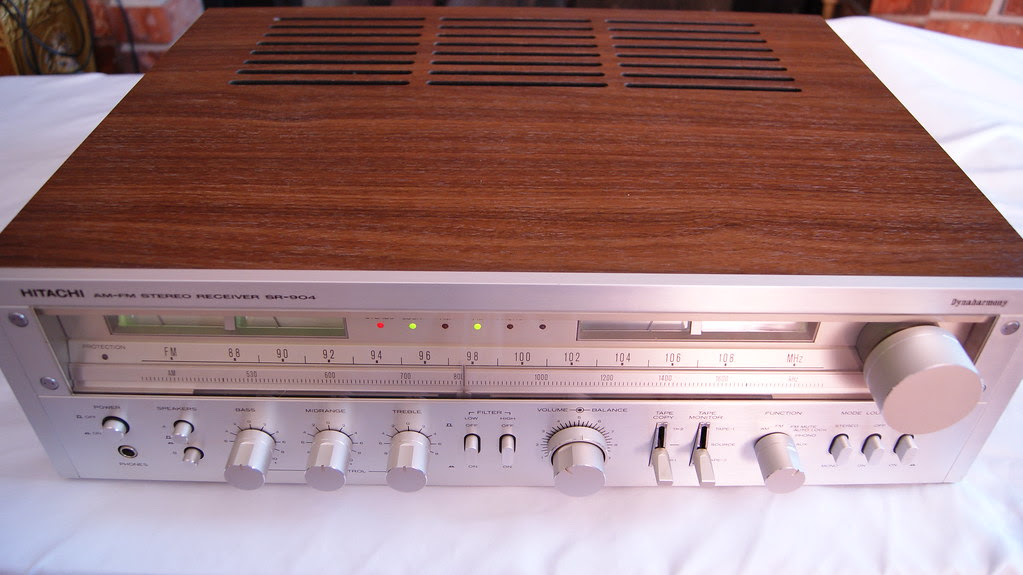 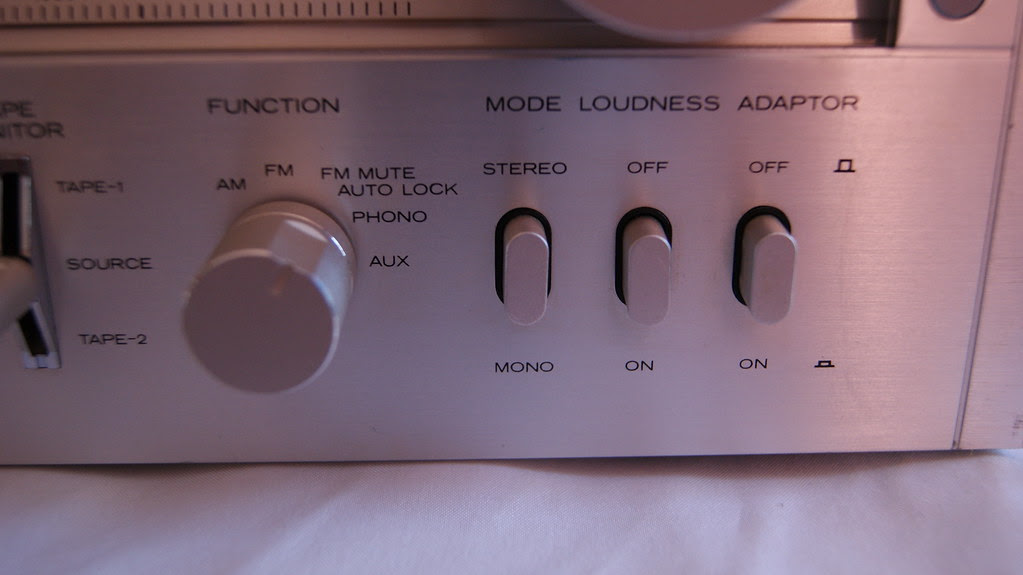 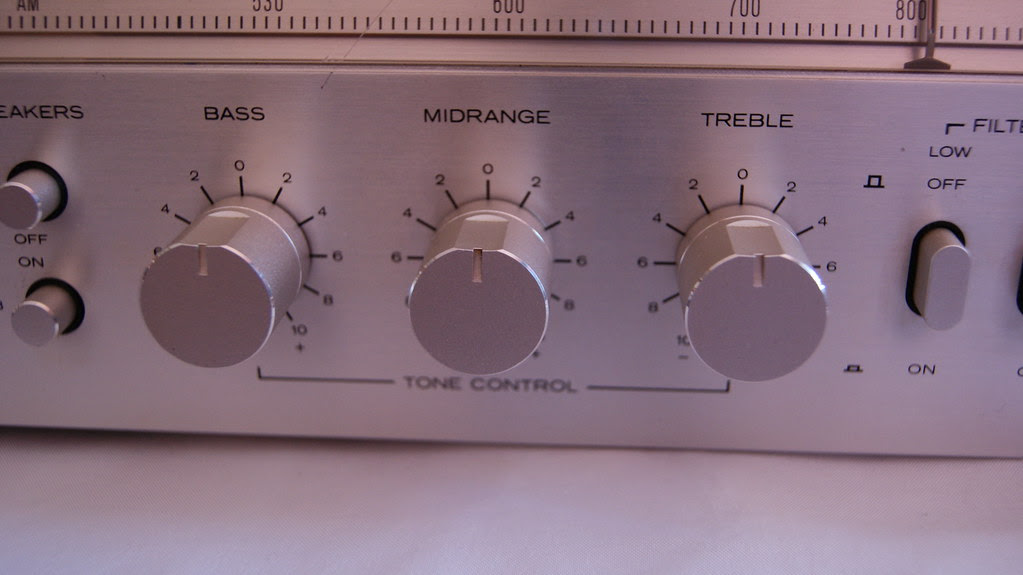 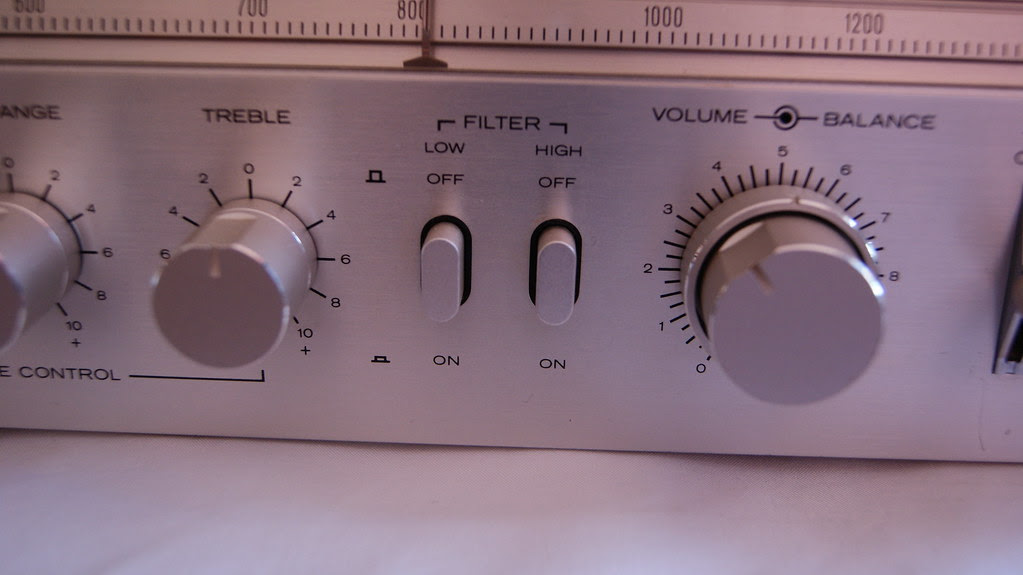 Posted by Audioless Winnipeg Group at 13:29

This is a very retro looking turntable by Pioneer.  It was made during the early to mid 70s and really well made too.  It has a beautiful real wood veneer plinth, a smoked dust cover with a handle at the front (classy!) and suspended platform.  It has a nice sized motor, good platter weight and a pretty neat looking tone arm.  It's not your typical S-shaped arm but rather a J-shaped tone arm.

It's a 2-speed, belt-drive and fully automatic turntable with repeat.  It also features the lead in option for 7, 10 and 12 inch records.  It's completely serviced and comes with a brand new belt and a new Shure M75 Type 2 stylus from Jico Japan.  The cartridge is a Realistic R47EDT, which was a re-badged version.  Plays great, tracks great and looks great.  It's a very sharp looking turntable.

Because it's a Shure there are plenty of replacement stylus out there, beware of low quality ones, in case the stylus breaks.  As well, from Jico they have their SAS stylus which brings the cartridge to a whole new level.  I have 3 Shures with SAS styli and they sound great!

One minor quibble, the tone arm rest has no clamp or clasp of any kind.  I looked at several pictures online and all of them are the same, none have the clamp.  I checked and read through the manuals and nothing is mentioned about it either.  Really weird, but not a deal breaker by any means.  We got something to help secure it!

Overall, it's in great shape, however, there is a stress mark near one of the hinges.

Nonetheless, this table is ready to go to a new and loving home! 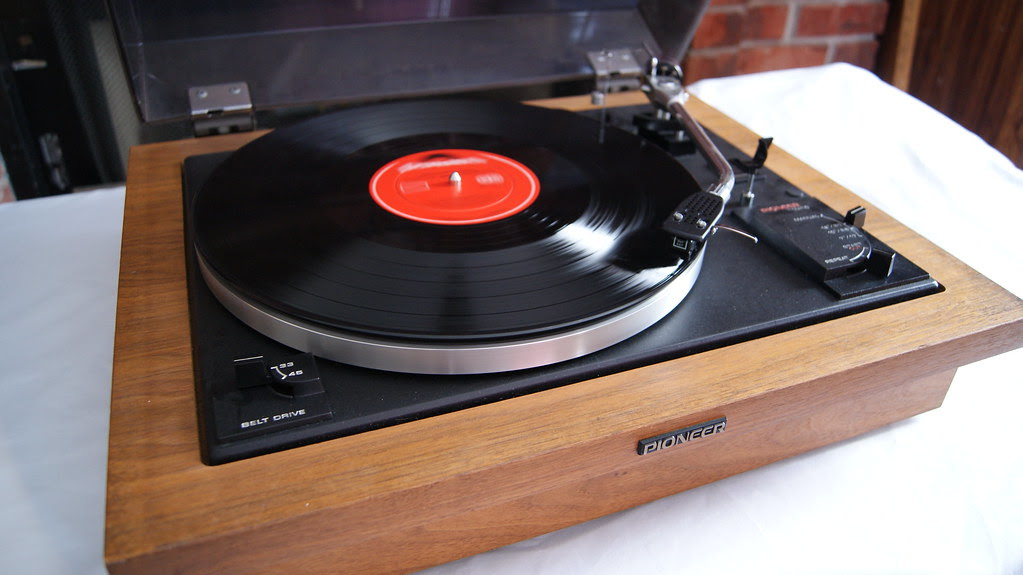 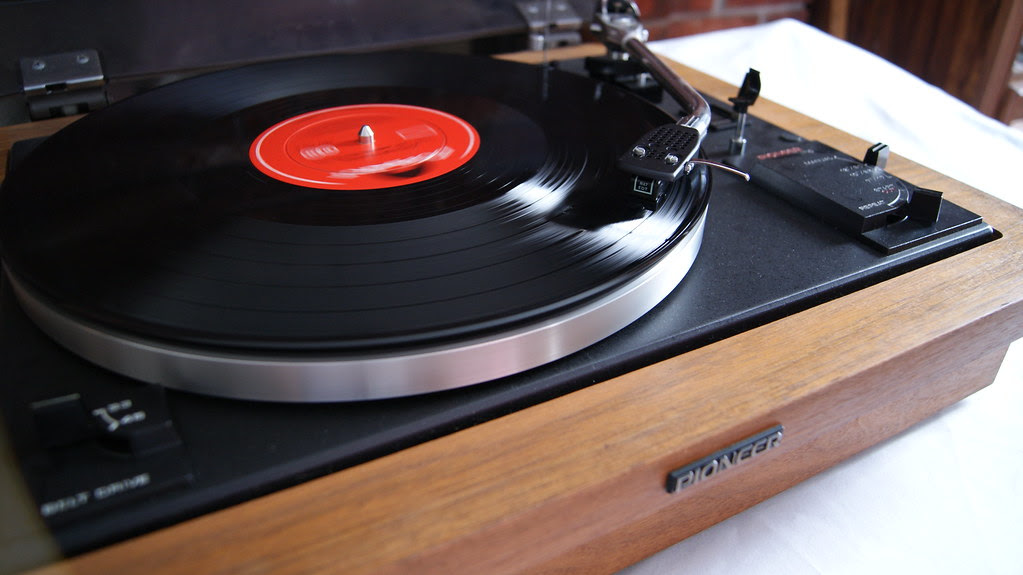 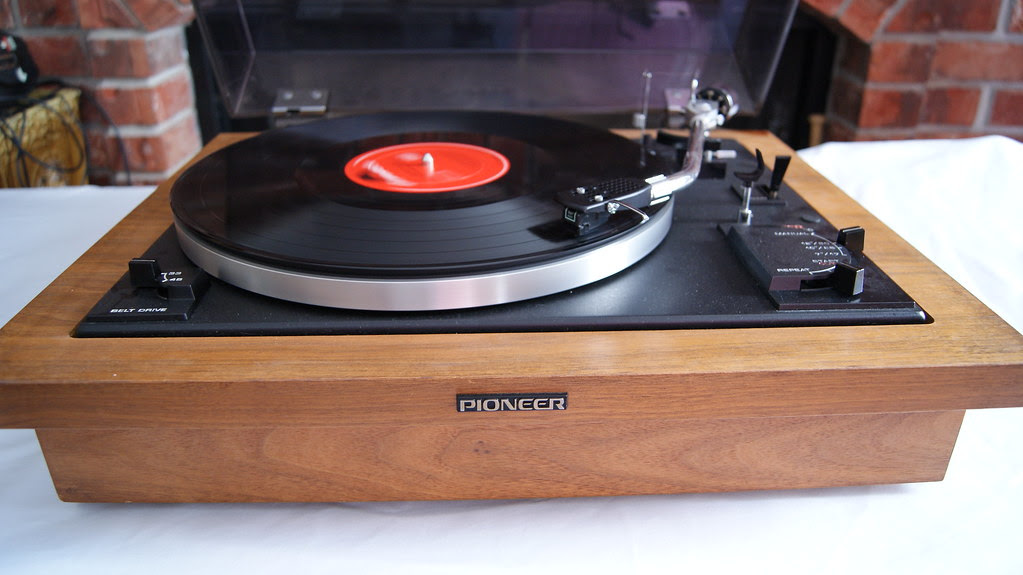 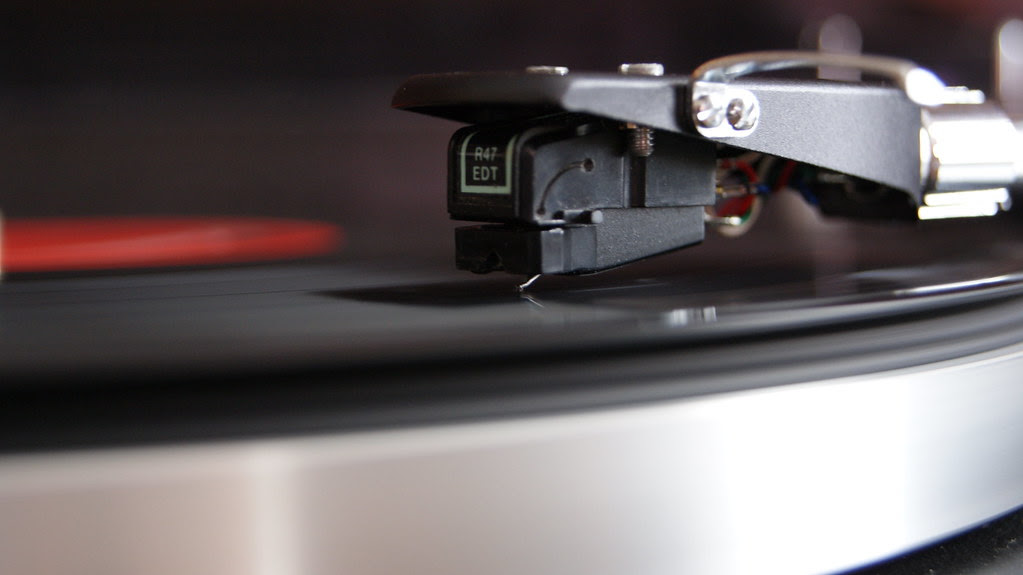 Posted by Audioless Winnipeg Group at 13:27